In 2006 ABTS were successful with a tender to work on the new IKEA project in Coventry. This project was one of ABTS’ first construction projects for a well-established global brand. This project consisted of around 4 months continuous work for ABTS.

For this project, ABTS manufactured and powder coated all car park fascia and crash bumpers. With ABTS having its own onsite team, this allowed for very little miss-understanding or break down in communication, therefore allowing for a successful installation, that met completion dates.

IKEA was a significant starting point for ABTS within the construction industry. With this project, it allowed other customers – and potential customers – to see the capabilities, work ethic, and high standards in which were – and are still – produced by ABTS.

ABTS saw the project as a major success -for the reasons mentioned above, and that it was also completed on time and within budget. 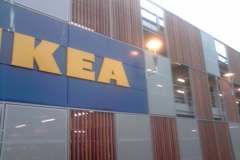